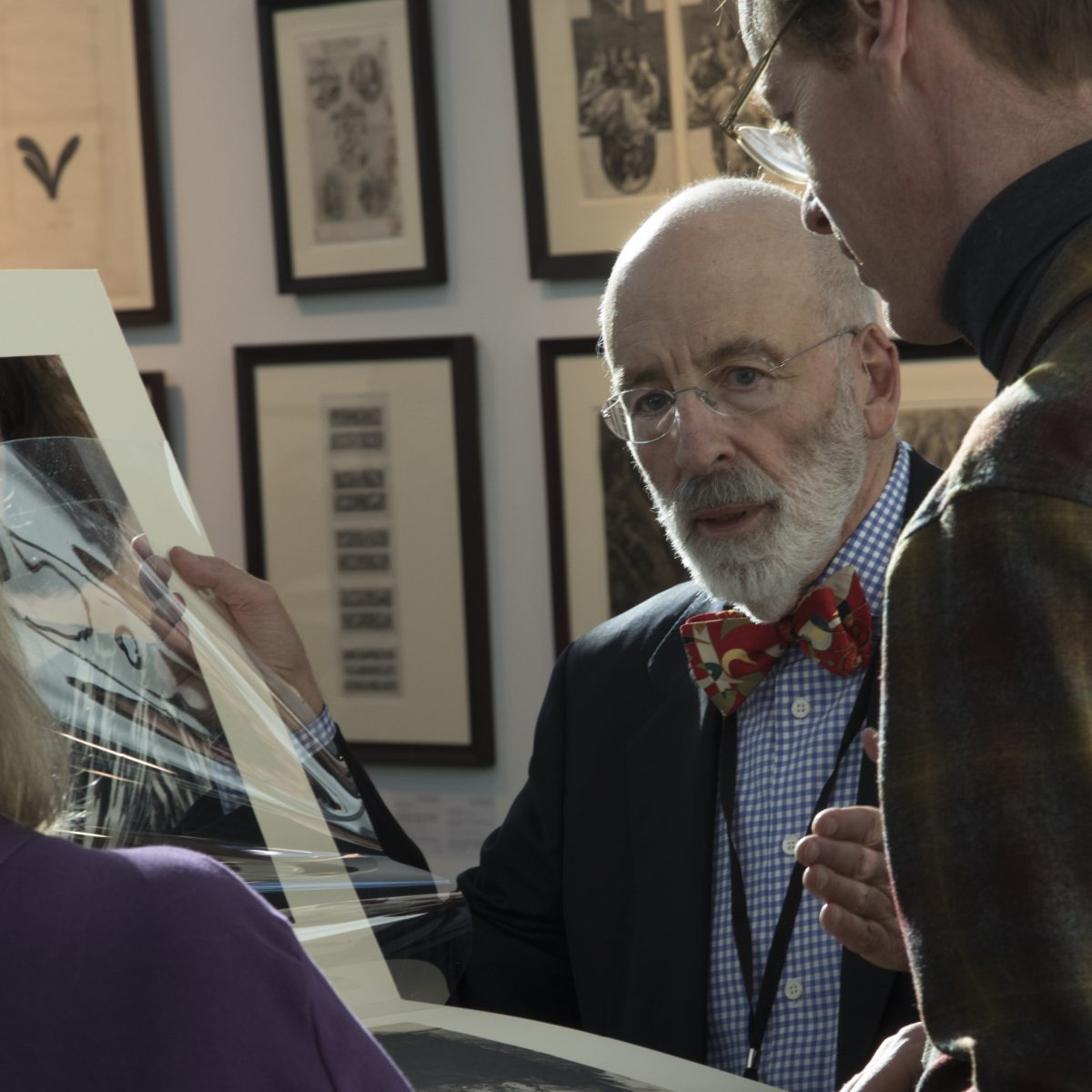 Harris Schrank Fine Prints
We specialize in exceptional examples of fine printmaking: original etchings, engravings, lithographs and woodcuts from 1490 to 1940. Your inquiries regarding fine prints are always welcome.
This user account status is Approved
About About
Contact Info Contact Info
Publications Publications

Jean-Emile Laboureur
Le Cafe du Commerce
1913
11 3/4 x 13 1/2, the sheet 15 1/4 x 19 7/8 inches
etching
35
Henri M. Petiet (with his oval ink stamp verso, cf. Lugt 2021a)
Jean-Emile Laboureur (1877-1943), Le Cafe du Commerce, etching, 1913, signed in pencil lower left and numbered lower right 28/35 [also with the signature and date in the plate]. Reference: Godefroy 126, Sylvain Laboureur 126, only state. From the edition of 35; there were also 4 artist proofs. In excellent condition, with full margins and deckle edges, 11 3/4 x 13 1/2, the sheet 15 1/4 x 19 7/8 inches. On a heavy cream/ivory wove paper. A fine impression of Laboureur’s great Cubist masterpiece, printed with a subtle veil of plate tone. Provenance: Henri M. Petiet (with his oval ink stamp verso, cf. Lugt 2021a) Le Cafe du Commerce represents Laboureur’s early adaptation of the cubist idiom to his own purposes – thereby creating a modernist vision that was really all his own. The intersecting planes, the abstracted limbs and features, the triangular and circular shapes are so much intended to express volume, as in the cubism of Picasso and Braque, as to show the movement, activity, and aesthetic underpinnings of life as he saw it here, in a cafe in Nantes, at the place du Commerce. Le Cafe represents a kind of high moment for a certain decorative direction that cubism and modernism was to take. It set the standard for modernist art that did not adhere to the rigid formulations of analytic cubism but instead capitalized on its development for stylistic purposes. As Marcel LeComte noted when describing Le Cafe in a catalog of Laboureur prints: “Piece cubiste, capitale dans l’oevre de l’artiste.”

Rembrandt Harmensz. van Rijn 1606 Leiden Amsterdam 1669 Ephraim Bonus, Jewish physician 1647 etching, engraving, and drypoint; 240 x 177 mm. Bartsch 278, White-Boon second (final) state; Hind 226; The New Hollstein 237 second (final) state provenance Hermann Weber, Bonn (Lugt 1383) Ferdinand, Prince of Saxe-Coburg and Gotha and King of Portugal (Lugt 968) C.G. Boerner, Neue Lagerliste 54 (1974), no. 33 (our stock no. in pencil verso 8356) private collection, Germany Ephram Hezekiah Bueno (15991665), usually referred to by his Latinized name Bonus, was a physician and writer who came from a Sephardic-Jewish family. He was a renowned doctor and at the same time wrote poems in Spanish. He was also a supporter of Samuel Menasseh ben Israel who lived across the street from Rembrandt and might have introduced Bonus to the artist. The imposing portrait print was executed in the same year as Rembrandt's prints of Jan Asselijn and Jan Six. All three have in common that they depict their sitters standing. What is exceptional with regards to Rembrandt's working process is that the print was neither based on a preliminary drawing nor was it executed directly on the plate. Instead, it was prepared as a small panel painting of identical size. This impression is mentioned in Lugt as one of the “meilleures pieces” sold in Hermann Weber’s sale (1856).

James Abbot McNeil Whistler
Bridge, Amsterdam
1889
6 1/2 x 9 1/2 inches
etching
James McNeill Whistler (1834-1903), Bridge, Amsterdam, etching, 1889, printed in brown ink on thin laid paper, signed with the butterfly on the tab and annotated “imp”, also signed with the butterfly on the verso and numbered 11. References: Kennedy 409, Glasgow 447, fifth state (of 5). In very good condition (slight nicks at edges), trimmed by the artist on the plate mark apart from the tab, 6 1/2 x 9 1/2 inches. Provenance: Vivian and Meyer P. Potamkin, Philadelphia; sale, Sotheby’s, New York, May 11, 1989, lot 302 (the catalogue entry mentions a note on the mat which identifies this impression as formerly owned by Walter Steuben Carter and illustrated in the Kennedy catalogue; comparison with Kennedy’s plate for his third state and this impression, however, shows that the illustrated print is not identical with the present sheet) Samuel Josefowitz, Pully, Switzerland A very fine, shimmering impression of this great rarity. This impression is included in the Glasgow inventory, ID number K4090301; only about 11 lifetime impressions in all states are known (three were also printed posthumously by Nathaniel Sparks). Although the structure of the composition was established in the first state, Whistler’s re-working of the plate through all five states, with the addition of myriad lines, shading, cross-hatching in both etching and drypoint, results in a radically altered look: the final state is a darker, more dramatic, indeed even stormier rendering of what in the first state appeared to be a relatively placid scene. Interestingly, Whistler left much of the area in the upper right corner of the composition unfinished, so that the bridge remains unattached – of course he would argue that this furthers the aesthetic intent, and of course he’s right.