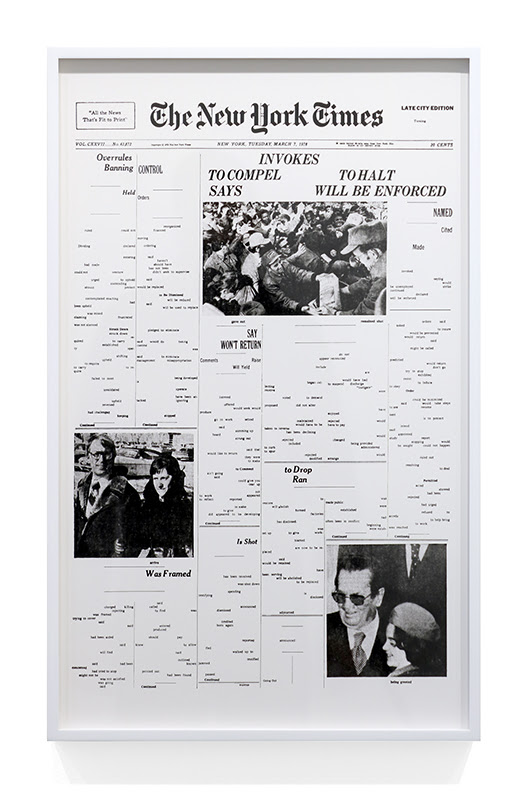 An online presentation of four works over four weeks

Sarah Charlesworth’s “Verbs,” which is part of her iconic “Modern History” series, was made in 1978 (released by the artist in 2003) and is a black and white photographic print made from a masked-off newspaper, reproduced at its original scale with only photos, verbs and the masthead remaining visible. Through the selective removals, Charlesworth highlights the formal hierarchies of power as well as the visual results of editorial perspective.

In 2013, Lucy Gallun, a photo curator at MoMA, NY, wrote the following:

“What is “unwriting”? Is it an act of removal or addition? Of stitching or unraveling? Of narration, interpretation, or revision? “Unwriting” is the term that artist Sarah Charlesworth (American, 1947–2013) chose for the introductory notes of her 1979 catalogue, “Modern History”…

Charlesworth’s elimination of everything except these specific elements may actually create a stronger focus on the details that remain. We see them more clearly because of the absence around them—and this seeing is a different manner of seeing—it is an active sight. Indeed, with works in this series, we, the viewers, are given a kind of agency in the task of interpretation. Through the high contrast of reproductions against a wide white ground, we are struck immediately with impressions: the images are large or small, they appear above or below the fold, they take up central portions of the page or are relegated to the corners…

Charlesworth died in 2013, leaving a legacy of work that is elegant in both its execution and its inquisitive subject matter. Throughout her career, her photographic series continued to trouble the fields of art history, art production, and the relationships between these and the wider culture in which they were considered. Her method was one of consistent questioning and of looking at things anew, showing us how our perceptions of pictures, objects, and even ideas are transformed through their contexts.”

Giulio Paolini has explored issues of control and comprehension using collage, perspective and quotation for much of his life.

In “Nove particolari in due tempi (Nine Details in Two Stages),” Paolini’s appropriated image of the figure is not in the center, but off to the right. The perspectival lines are not connected to the right (writing/drawing) hand of the figure, but closer to the left eye and/or the raised left hand. In the overall composition, Paolini balances between centrifugal and centripetal forces where the left goes right, the right goes left and hierarchy (between artist, viewer, subject matter, source material and end result) is always in question.

Looking further at the figure, its image can be read as being taken from “the past” on account of its enlarged engraving-like lines (the image is taken from a seventeenth-century handbook about perspective, “Les Perspecteurs” by Abraham Bosse). The reproduced lines are contrasted by the rigidly clean and geometric rectangles on the other sheets of paper as well as by the straight but hand-drawn lines that unify the overall composition. In addition, the images of what can be read as clouds or the sea are also, visibly, reproductions (on account of their image-grain) and so, not only are they hazy on account of the imagery, but also on account of the images being multiple steps away from their source.

Paolini’s use of reference expands the meaning of the work and also serves to acknowledge and focus on the idea of “reference” as a forever-morphing aspect of life. Order (perspective, predetermined diagrams on each sheet showing the placement of each piece of paper in the overall composition, every sheet representing the scheme of the whole work) and chaos (the seemingly haphazard, strewn-about quality of the sheets of paper), the past and the present, the actual and the reproduced – these are all subjects within “Nove particolari in due tempi (Nine Details in Two Stages)” and subjects with which Giulio Paolini has spent over fifty years exploring through works on paper, installations and writing.

Paul Mpagi Sepuya’s project is a study of black material in reproduction and subject position. Digital photographs produced as salt paper prints present questions about the fidelity of black as an unfixed value. Sepuya (Black) holds, presses, and affixes an unexposed Fuji Instant Print (black) against cut and torn work prints depicting fragments of various (Black) bodies in embrace. The warm tones of the salt paper print process contain no absolute black or white values, allowing the subjects of the work to resist collapsing through language into a singular black.

“I began as a portrait photographer and feel that I am still making portraits. Inhabited spaces tell you a lot about the people who live and work in them and are more revealing in some ways than anything a person might say to describe themselves. I certainly feel that this is true with photographic portraiture, which is frequently more about the photographer than it is about the sitter. A portrait of somebody’s home gets at who they are indirectly but often more accurately.” (Shellburne Thurber)

Shellburne Thurber’s “Nashua, NH: Great Grandparents’ Portraits with Floral Wallpaper, 1975” is as an early example of Thurber’s lifelong interest in the energetic quality of lived space. Renowned for her long-term photo-based projects including, “Home” exhibited at the ICA, Boston in 1999, “Renovation” at the Boston Athenaeum in 2002, “9 Wellington” at Barbara Krakow Gallery in 2011, “Looking for Saint-Gaudens” at the Saint-Gaudens National Historic Site in 2015 and 2019’s critically acclaimed exhibition, “Phantom Limb” at Krakow Witkin Gallery, Thurber uses the medium of photography to explore the relationship between constructed space and human presence.

Shellburne Thurber graduated from the School of the Museum of Fine Arts, Boston and Tufts University. Her work has been in numerous group and one person shows both in the USA and abroad. Her work is in several collections including the Museum of Fine Arts Boston, the Addison Gallery of American Art, the Worcester Art Museum, the ICA Boston and the DeCordova Museum and Sculpture Park, to name a few. She has taught extensively throughout New England, most recently as visiting professor of photography at the Massachusetts College of Art and Design. She has been the recipient of several awards including a fellowship from the Radcliffe Institute for Advanced Study at Harvard University and an Anonymous Was a Woman grant.