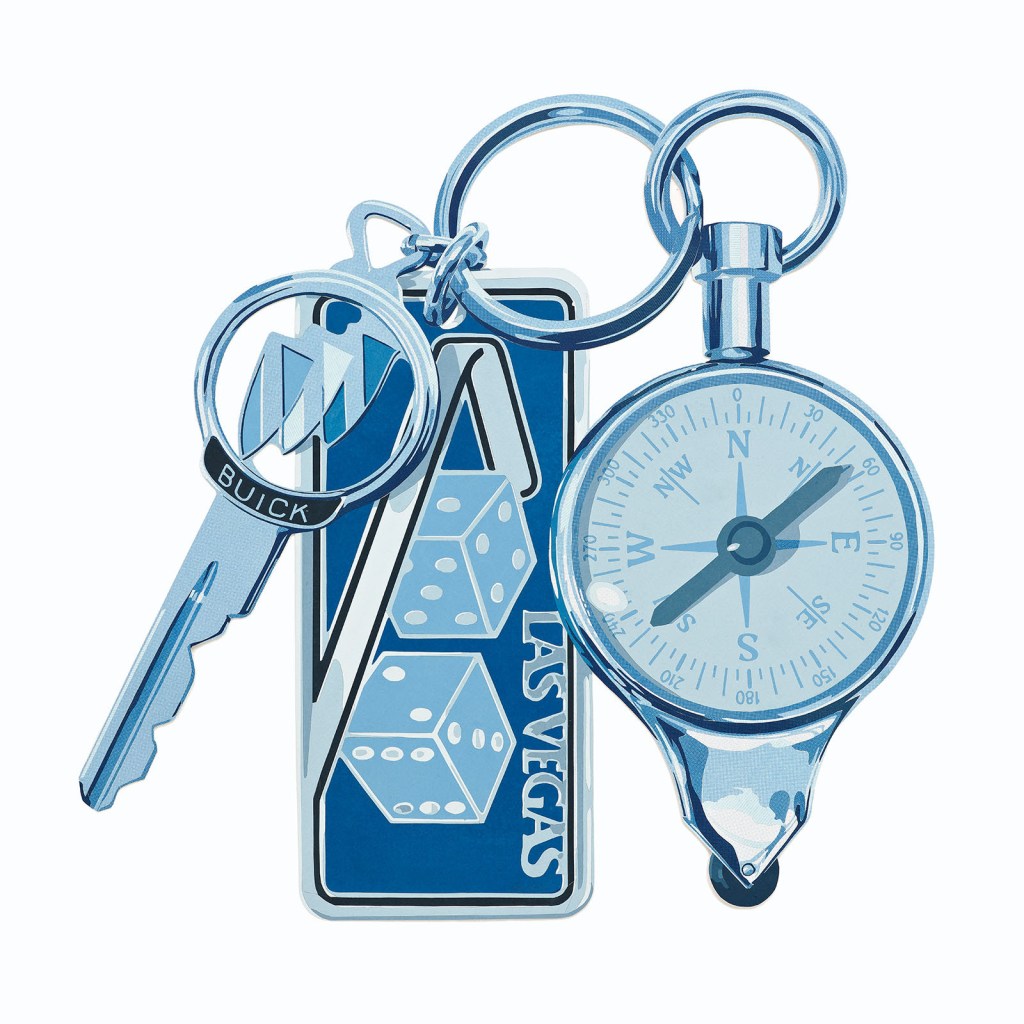 Appropriated from Katharine Lee Bates’ lyrics for the song America the Beautiful, Amber Waves of Grain is Doyle’s direct response to the current emotional climate in America.  Tracing back to the sources of this emotive thread, this body of work is an evidentiary exhibit of the interrelationship between hegemonic masculine supremacy, western capitalism, and the mythic ideals of American identity.

Inspired by American Realism, Doyle was greatly influenced by Edward Hopper, whose blunt yet affective approach to solitude formed his ideas about straightforwardness of subject matter. In Legacy, an image of a filled garbage bag laying on its side, Doyle notes the domestic banal, while also hinting toward the notion of America “taking out its trash.”   The packed and splayed suitcase in Wanderer evokes yearning for the idealized domestic travel of Beat generations, a less homogenous open road. There is no True North depicts keys to a classic Buick, attached to a compass and Las Vegas memorabilia key chain; collections of a place traveled and places yet to go.

These unique works are all rendered in indigo and blue cotton paper, both printed and handmade, and are painstakingly hand-cut and collaged by the artist.  At once nostalgic and commonplace, his larger-than-life forms of common objects become contemplations on our collective experience.

Known for his use of denim and indigo, Doyle employs these mediums to embody the shame around patriarchy and racism.  The materials themselves have been woven into myths of rugged individualism and have become symbols of American exceptionalism. Doyle considers his process as rendering imagery with a filter of shame. Preferring the tongue-in-cheek to literal statements, the artist delivers his message with dark humor, poking fun at tropes of masculinity, solitude, and American history.

An online presentation will run concurrently with the gallery exhibition.

Nick Doyle (b. 1983) is an artist who lives and works in Brooklyn, New York.  He holds an MFA in sculpture from Hunter College and a BFA from the San Francisco Art Institute.  Doyle attended the Skowhegan school of painting and sculpture in 2014.  From 2014­–2017 Doyle was a resident of the Lower Manhattan Cultural Council’s workspace program.  Solo exhibitions include a forthcoming exhibition at Perrotin Gallery, Seoul, South Korea, Nowhere at Stems Gallery, Brussels, Belgium, Paved Paradise at Reyes|Finn, Detroit, MI, No Vacancy at 56 Henry, New York, NY, The Great Escape at Steve Turner Gallery, Los Angeles, CA, Soft Arrest at Mrs. Gallery, Queens, NY, and Steven, at INVISIBLE-EXPORTS, New York, NY.