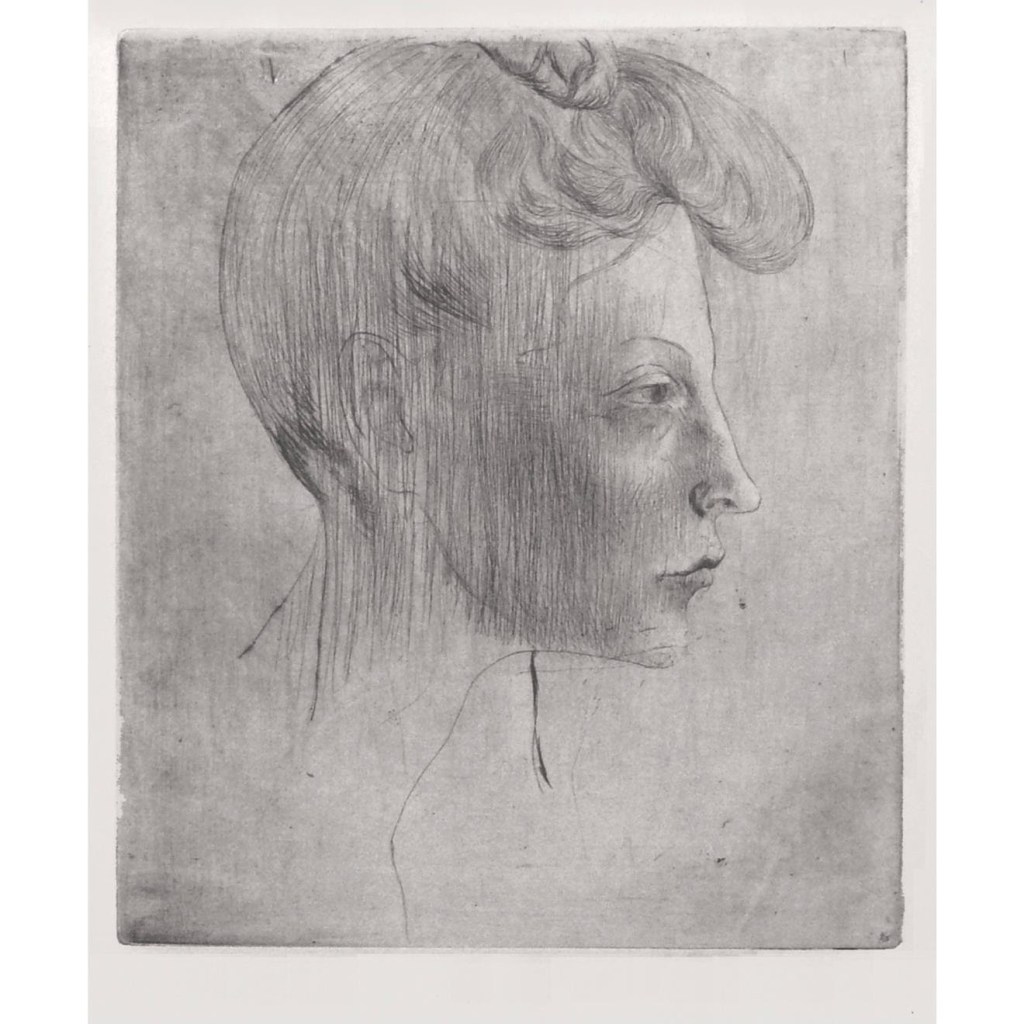 This week we continue our exploration of prints in Picasso’s “Saltimbanques” series, and we’ll begin by accompanying biographer Pierre Daix on a remembered visit to Picasso’s home. The artist brought out a long-thought lost picture which he had found tucked into the frame of another work. It was a portrait in profile, a woman with hair piled atop her head and a long, delicate nose. “It’s Madeleine,” said Picasso. “I almost had a child with her. You imagine me with a sixty-four-year-old son!” At the time of writing, a sixty-four-year-old kid would have dated Picasso’s affair to 1904.*

Though we cannot say for sure whether it is the same work that Picasso showed Daix that afternoon, Tête de femme (B6), pictured above, was created in 1905, and is included along with the Saltimbanque images, though it is not among those which show the eponymous performers. Its subject – the woman Picasso mentioned to Daix – is depicted with familiarity, intimacy and intensity. Madeleine was an artist’s model who appeared in some of Picasso’s Pink and Blue period paintings (sometimes paired with another woman, posed as a lover).** She was known for her slim figure and features, which inspired the instantly recognizable look of Picasso’s early 1900s girls, and can be seen in Vasquez Diaz’s Madeleine, Amie de Picasso (1907).* Her fine brow, slim jaw, and thin lips may be familiar to readers who tuned in last week (which you can read here), for it bears a marked resemblance to another Saltimbanque work: the supposedly male subject of Buste d’homme (B4) shares the same slim features as Madeleine, and even carries on their head the ghost of an updo. It seems likely that despite the titular discrepancy, the two are one in the same subject.

The impression of B6 pictured above was pulled by a different printer than the initial ones, in a different year. That’s because in 1911, after almost a decade – years marked by an evolution of style that had already ushered Picasso into his Cubist years and a more public recognition – the esteemed dealer Ambroise Vollard took interest in the series and purchased the plates to edition and publish them. Vollard had the plates steel-faced, preparing to pull about 300 impressions – there would be one special edition of 27 or 29 impressions on Japon paper, and one of 250 on Van Gelder paper – and hired the printer Louis Fort to print them. The impression pictured above is that of the limited edition, marked for its comparative richness, its warmth.***

Not every plate in the series ended up printed in the edition of 250. La famille de Saltimbanques au macaque (B11) shows two Saltimbanques performers in a quiet domestic moment, the man still wearing his Harlequin hat and a monkey in the place of an elder sibling, watching the woman lift a bundled baby to the sky; they upend our traditional notions of “family” even as they comically mirror them. For this image, Picasso used a zinc plate instead of a copper one, and so by the time it came to printing Vollard’s edition, the plate was oxidized and unprintable. One of the few impressions pulled is seen above.

How incredible to think that these four prints we’ve looked at over the past two weeks were among the first ever etched by Picasso’s hand. As Pierre Daix wrote, as he concluded his reflection on his trip to Picasso’s chateau, so many years ago, “It is remarkable that every time Picasso uses a new technique, the trial run is a masterpiece.” Next week, we follow Daix’s insight on Picasso’s uncanny ability to pick up technique into another series, this one hallmarking Picasso’s use of aquatint. Until then, we wish our readers a safe and relaxing weekend.