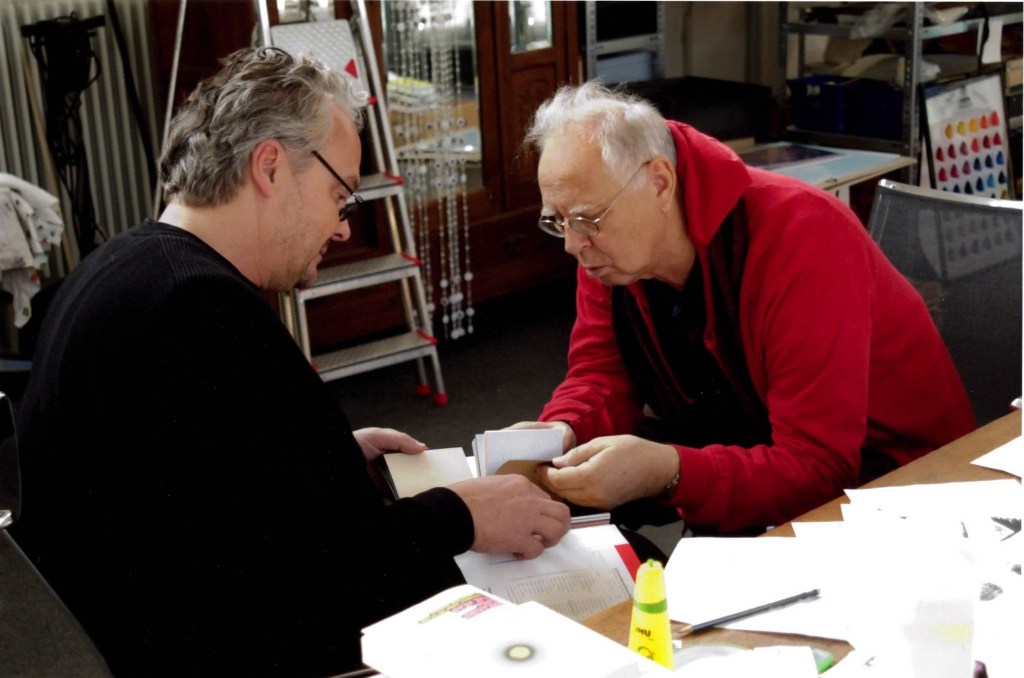 A few days before Sigmar Polke’s death, Mike Karstens and the artist met for the last time in Cologne, in early summer 2010, to discuss plans for a joint exhibition project. As they were deliberating about what the title of the show could be, Polke said: “Leicht kann jeder!” (literally, “Everyone can do easy”.) He explained to Mike Karstens why he found this exclamation so appropriate: “You don’t remember that, do you? Back when we were doing the work on the iceberg, I called you to ask how things were going. And you moaned that it was pure hell. And then I said: “You see, ‘Leicht kann jeder’”[1].

In this POLKE POST, we will begin by turning our attention to the year 2021, which has just begun, in a completely optimistic vein. We all long for better times for our society and culture, and we hope that the foundation can realize many wonderful projects this year. We will begin on 4 February 2021 with a conversation between ANNA POLKE, MIKE KARSTENS and CHRISTIAN SPIES, which will mark the start of our POLKE SALON event series, launched in cooperation with the University of Cologne. In view of the current situation, it is unfortunately more than uncertain whether we will be able to welcome you as an audience in our foundation’s rooms as planned. In any case, these three interlocutors will engage in a dialogue about and with Sigmar Polke’s work, and in particular about the genesis of his graphic art and painting. If you are not able to be there, you can still follow the discussion because this and subsequent POLKE SALON events will be recorded and then published on our website. On our site, we will also inform you at short notice whether the events can take place in public.

As a small foretaste, you can read in this POLKE POST about the genesis of Sigmar Polke’s Eisberg (Iceberg, 2001)[2], one of the first projects he carried out with Mike Karstens. The basis is a conversation between Anna Polke and Mike Karstens, which is part of the Anna Polke Foundation’s Oral Art History project Take a seat. Talking about Sigmar Polke, documenting the voices, impressions, and accounts of Sigmar Polke’s companions, friends, and contemporaries.

In 2000, Sigmar Polke and Mike Karstens began their collaboration, which gained its productive tension, in particular, from the exploration of (im)possibilities.
“He always just tried out things. He just tried everything. And that’s what enabled him to transport his ideas to the medium of print. Of course to some extent it was crazy. […] That’s how we worked. Very often, on a trial and error basis.” Already during their first meeting, initiated by Linde Rohr-Bongard[3], Sigmar Polke assured himself of the mettle of the trained printer. Polke told Karstens that when he had told other printers about his unusual plans, they had always said it wasn’t feasible. He warned Karstens: “But don’t give me that stuff!” And Karstens replied, “No, I always just say, I don’t know how to do it.” Using this heuristic approach, they tested all options, working towards the result in what were often long-lasting processes with setbacks and intermediate steps. Thus it was their joint search for and finding of materials and their experimentation with them, divorced from established categories, which characterized their realization of graphic editions. “You have to have the urge to experiment. That was more pronounced with Sigmar Polke than with anyone else. You were allowed to experiment, and sometimes there were dead ends. In the end, we achieved almost everything we wanted to, in whatever way.”

One of these elaborate printed works was Eisberg (Iceberg), the second Polke project that Mike Karstens realized, for Jürgen Becker Galerie in 2001. The starting point for the edition was three photocopies containing the motif of an iceberg. In the manipulated Xerox works that Sigmar Polke created especially starting in the 1990s, he moved the respective original during the copying process. The ensuing changes in the motif – distortions, overstretching, compression – were not the product of chance, however; each sheet was the result of a process that was repeated many times under the artist’s meticulous eye. The sheets reveal, owing to the interaction of mechanical and manual techniques, precisely this processuality: the motif gets into violent motion due to appropriation, and the force of nature melts away. In the following, Mike Karstens describes the genesis of the work and how this manner of reproducing the iceberg lent it its characteristic transparency and vibration: “There were supposed to be three sheets, but we came to the conclusion pretty quickly that we could also put them together on one sheet. Then he said, now I’m going to do it differently; I want it to seem as though you’re looking out at it through a window, through three windows. The problem was that these photocopies had very nuanced grey tones. You have to know that if you make a copy of a copy and then another copy of it, it becomes more and more hardened and the nuanced tones increasingly disappear. […] But you can fix that with soft film if you know what you’re doing. And that’s when we came up with the idea – a relatively crazy idea, I must say – not to print the whole thing, but to stay on the level of that material: film. And not to re-expose it on photographic paper, but on reproduction film, which was semi-gloss but transparent. In terms of size […] the whole thing was utterly insane. I then did this in the darkroom. At that time, there was somebody who had a huge enlarger that could be used to re-enlarge something up to a size of two meters. And he knew I could do it myself. He let me work in the workshop, where I spent days making enlargements. And I washed them and fixed them – crazy. There were these really big rags. We felt like an albatross at some point, and my arms were sore afterwards. And these repro films – many people today think it was printed; it’s always wrongly described as a print on synthetic paper, but it’s actually film.”

Not only due to a desire for transparency, for a proximity to glass and film, and to oscillate between artistic media, but also due to the fact that a colour reverse-side print of the reprographic material was created in the next production step, numerous aspects of Sigmar Polke’s artistic oeuvre culminate in the work Eisberg. Mike Karstens described the special requirements that had to be met and mastered for the edition to be completed, true to the motto ‘trial and error’, after the first attempted colour print did not hold together: “When I picked up this test print after two or three days, the colour fell off of it. Which was a stroke of luck. Just imagine if we had done the whole thing… It became clear that this was the wrong colour on the material. But there was no ink that would hold on repro film. Nor would it make sense. No one had ever done that before. So we tried out different colour systems and then waited a week each time. The third colour system was then in fact scratch-resistant, after just two days and even after a week, and that’s still the case today. And so we used the colour. […] And it became a very beautiful edition highly sought after in the market. It is only an edition of 60, which is divided into four colour variations. So it’s actually an edition of 15 × 4. There are a few that have all four colours.”

Sigmar Polke’s work is characterized by superimpositions, by working with several layers, also in printmaking. In this way, the triptych Eisberg was executed on an unusual transparent substrate, its parts winding and flowing into each other. The superimpositions demonstrate that everything moves, including your head, according to Polke. He had explained to Bice Curiger that his paintings are constantly changing: “You have to look fast. You have to be real quick when you look at my pictures. […] A picture doesn’t become a picture until others do their part. You have to engage yourself with pictures that change if you want to flow with them.”[4] This desired way of seeing includes the movement of the viewers in the space and their gazes accompanying the melting ice. The installation of all four variants – white, turquoise, blue and lilac – can be experienced in the newly established collection presentation at Kunstraum am Limes in Hillscheid (installation views on the website) after the museums reopen (hopefully soon).

[1] Sigmar Polke, related by Mike Karstens, in conversation with Anna Polke, Münster 2011, archive of the Anna Polke Foundation. All other statements quoted or paraphrased of Mike Karstens are also taken from this interview.
[2] Sigmar Polke, Eisberg, 2001, colour serigraph on and behind reproduction film, 68 × 142 cm, edition of 60.
[3] The art journalist Linde Rohr-Bongard has been responsible for Kunstkompass since 1985. On her behalf, S.H. oder die Liebe zum Stoff (S.H. or the Love of Fabric) in 15 variations for Capital was created in 2000 as a result of the first realization of a Sigmar Polke edition by Mike Karsten.
[4] Sigmar Polke, quoted from: Poison is effective; painting is not: Bice Curiger in conversation with Sigmar Polke. 18 Dec. 1984. In: Parkett, No. 26, Zurich 1990 p. 25.