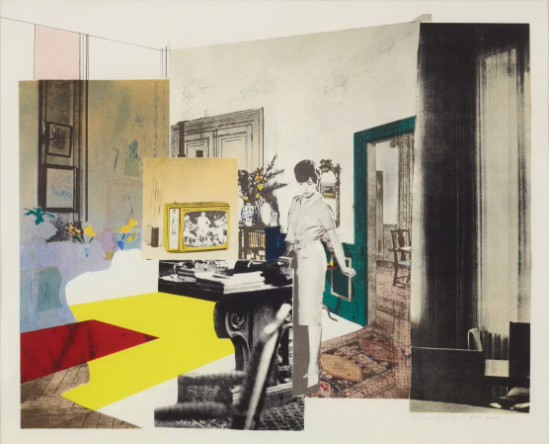 “Richard Hamilton: Towards a Definitive Statement is a major retrospective celebrating arguably the most influential British artist of his generation, Richard Hamilton (1922 – 2011), which was due to open in our gallery in early January 2021 but can now be seen online only; it coincides with the publication of a new book by Michael Bracewell that provides a fresh interpretation of an artist whose achievements and legacy remain unmatched.

Over the next few weeks we will provide an insight into Hamilton’s creative process and his breadth of visual experimentation through a weekly In Focus series exploring the core themes and subjects that underpinned his work for over 60 years. We begin with Defining Pop, which delves into Hamilton’s relationship to pop art, a term he first coined in the mid 1950s. This includes a screening of a documentary made in 1991 with Richard Hamilton and his former student, the musician Bryan Ferry.

The In Focus series will comprise further film content, a closer look at Michael Bracewell’s new book Modern World: The Art of Richard Hamilton, and the launch of the first episode of our new podcast series. Spotlighted themes include artworks that address political subjects, explore interiors and portraiture, and Hamilton’s fusion of art and technology.

I first met Richard Hamilton in 1974 and went on to work closely with him for over thirty years. He was relatively neglected from the early 1970s through the late 1980s only emerging as an artist of immense significance in the Postmodernist period (and he himself remained uninterested in the laissez-faire ethos of Postmodernism). His work was far too for cerebral for it ever to prove ‘popular’, with the extraordinary scope of his interests and accomplishments acting as a deterrent to broad acceptance. This never bothered him at all. He had the courage of his convictions and an unshakeable confidence in his own beliefs. He was a perfectionist and refused ever to compromise. He was delightfully disdainful of the art market and quite ready to expound on the venality of dealers and auction houses alike. He never signed a contract with any gallery and insisted on complete control of the occasional sale of his unique works to museums and to a very few collectors who he considered to be friends and supporters.

Fortunately for me he never saw me as a dealer at all but as a friend and admirer who could facilitate the distribution of his prints to a wider audience. The rules were straightforward. From the moment we started working together in the late 1970s I did exactly what he said at all times and I was happy to do so because I knew that I was acting for a truly exceptional artist and human being. I remained in awe of his intellect. My core speciality has always been the publishing of original prints and I have worked with some exceptional printmakers over the past 50 years, but I have never worked with any artist who could master all available print media to such perfection.

Over the years I mounted numerous exhibitions by Richard, but never envisaged doing so online. We hope that this will bring you a little solace and pleasure in these days of self-isolation. If you have any questions, we would love to hear from you. We are all working remotely from home and we would be happy to supply you with more information about the artist and his work.”  Alan Cristea

If you would like information about all available Richard Hamilton works, please contact us directly via [email protected].