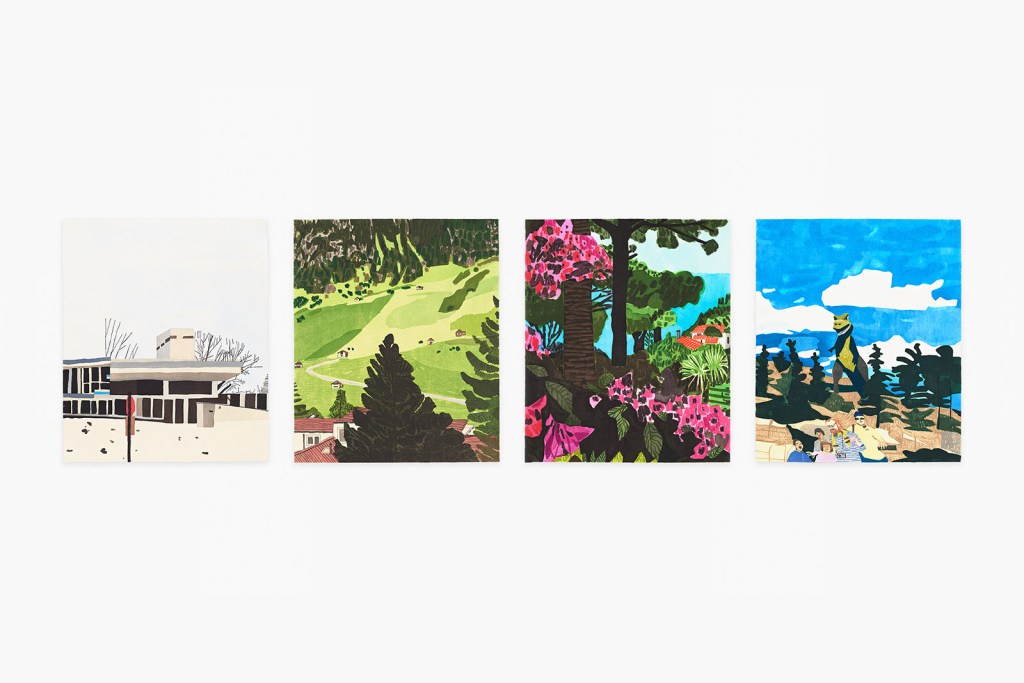 Pace Prints is pleased to exhibit Four Landscapes, a new suite of four Ukiyo-e Japanese style woodcuts by Jonas Wood. The prints will be on view March 25 – April 24, 2021, in our 3rd Floor Project Room at 521 West 26th Street.

Jonas Wood collaborated with Pace Editions Master Printer Yasu Shibata on Four Landscapes over more than two years. Drawn from found and personal imagery, the prints embody Wood’s distinctive approach to taking apart and rebuilding an image with additive mark-making and patterning, distilled through the Ukiyo-e printmaker’s subtle command of form and color. Each print required between twelve and twenty wood blocks, which Shibata carved using traditional hand tools. The blocks were inked with up to 73 individual colors, each applied by hand for every impression of the edition. A selection of the hand-carved wood blocks used to print Four Landscapes will be displayed alongside the prints.

The four images, titled and arranged in the order of the seasons, all have personal histories for Wood, and he has incorporated each into previous works, whether as the main subject of a canvas, a gouache or a drawing, or as an element within a larger scene. Fall, drawn from a snapshot taken at a roadside attraction on a family trip, shows Wood as a child with his father, sisters and a family friend, posed in front of a giant model dinosaur. The photo, which was taken by the artist’s mother, appears on the wall of an interior scene in the 2007 gouache New Pictures.

Spring and Summer both originated in photos — of Switzerland and Italy’s Amalfi Coast — that family and friends shared with Wood, and which he has painted both in gouache and acrylic. Winter, which appears to depict a modernist house seen from the street, is a recropped section of an early collage which the artist created from his own photographs of his sister’s Minnesota neighborhood. In isolating a detail, Wood makes the composition a study in subtle, almost monochrome, tonalities.

Wood embraces iteration and cross-pollination in his work, often approaching an image in several versions and different media and allowing each process to imprint its characteristics on the image. A prolific printmaker, he has added the possibilities of print techniques and their unique modularity to the traditional representational painter’s path from drawing to canvas. Collaborating with Shibata to create the wood blocks for Four Landscapes allowed the artist to see these long-cherished images anew:“I’m not capturing reality as it’s seen by everyone. I attempt to rebuild it through blocks of color and these shapes and patterns, and to see it separated in a different way than I painted it was incredibly revealing to me.”